Faking It: Putting the faux in photography

As art photos go, it’s the gold standard: French artist Yves Klein, a mystic conceptualist who claimed to have signed the blue sky as his first work of art when he was just 20, launches himself chin up, wearing a highly respectable dark suit, into the air above a suburban street in Paris. In the background to the right a lone bicyclist pedals stolidly by, ignorant of the impending impact. “Leap into the Void” expressed Klein’s urge for transcendence through art, a fundamental theme of the brief French Nouveau réalisme movement.

It was October 1960, 52 years ago. Klein printed up a fake newspaper with the final photo printed on the front page, under the headline “A Man in Space!” Over succeeding years the photo became legendary, a touchstone for Conceptualists but also for contemporary photography. But until the Metropolitan Museum opened “Faking It: Manipulated Photography Before Photoshop,” nobody has ever seen how it was done.

“I’d heard that the Roy Lichtenstein Foundation had bought the archive of one of the photographers responsible for the shot,” says Mia Fineman, assistant curator in the Department of Photographs at the Met and organizer of this show. “He’d become a recluse in New York, and died when one of his bookshelves fell over on him.”

The foundation was cataloguing thousands of these photos and negatives that documented art events in Paris, many of them involving early performance. “And there was the shot of Klein jumping with a crowd of judo students (Klein himself was a black belt) from a nearby school, along with the artist’s wife, holding a canvas tarp to catch him,” she said.

The Met has blown up both versions into wall-sized murals on either side of the entrance to “Faking It.”

Until these nine-foot-tall wall photos were installed, you really couldn’t see where the photographers, Henry Shunk and Jean Kender, had torn the negatives, but at the Met you can clearly see the start of the tear on the left, obscured by the foliage.

Klein had actually leapt several times that day before he achieved the arch-backed, ecstatically smiling image we now know, and he immediately selected the bottom half showing the oblivious cyclist — it was a little homage to Magritte, indirectly, of course.

“Leap into the Void” illustrates perfectly the lesson of “Faking It,” which is that photography has been a faked medium from its very beginning.

Stretching from early, hand-colored daguerreotypes to 1960s fashion photography, the show documents how technical restrictions all but demanded manipulation in order to create the illusion of reality: In the beginning, for example, skies were inevitably overexposed, coming out blank whenever the camera captured people or buildings in daylight, and photographers would strip in shorter exposures that registered clouds.

In 1858, for example, Henry Peach Robinson issued “Fading Away,” showing a young girl propped up on snowy sheets as her father stares despairingly out the window and family members look on distraught. It was, in fact, composed of five different negatives, each posed in different lighting, because the exposures necessary to record the details of each figure plus the view out the window were impossibly at odds.

Robinson theorized archly that “Truth and fact are not only two words, but, in art, at least, they represent two things. …Truth is conformity to fact or reality — an absence of falsehood. So that truth in art may exist without an absolute observance of the facts.”

Such quibbles did not disturb Queen Victoria’s consort; Prince Albert put in a standing order for every composite photo Robinson produced.

Collage, retouching, distorting lenses, hand-painting, double exposures — most of the tricks in the photographer’s trade were obvious right away, and nearly all of them imitated powers painters had long enjoyed.

Early on, the scientific prestige of photography and its obvious fidelity to the way we see things in the round confused people. A collage of many different-sized heads arranged in an oval by a Scottish photographer led to viewers asking how he’d gotten everyone to pose at once.

Double exposures produced “spirit photographs,” showing loved ones lost in the Civil War hovering, transparently, over their survivors; some folks thought they were seeing documentary evidence of ghosts.

“Faking It” even revives the turn-of-the-century fad for photos of decapitated heads, most of them inspired by the magic shows of the day. 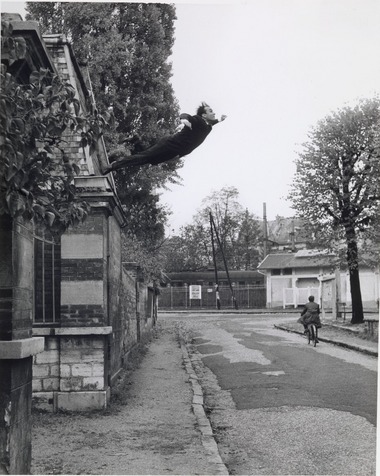 Across the hall, the Met has installed “After Photoshop: Manipulated Photography in the Digital Age,” which demonstrates how the urge to fool and mislead has only become more seamlessly undetectable in our era. Reality may not be a casualty of photography, but it’s certainly got its truthiness exposed here.

And sometimes, as Prince Albert might say from his can, it lets out a higher truth, like Weegee’s portrait of LBJ titled “Draft Johnson for President,” printed in 1968, the year the artist died: In it, the POTUS has a Pinnochio nose. The camera can indeed lie in service of truth, just as Robinson said.

This website uses cookies to improve your experience while you navigate through the website. Out of these, the cookies that are categorized as necessary are stored on your browser as they are essential for the working of basic functionalities of the website. We also use third-party cookies that help us analyze and understand how you use this website. These cookies will be stored in your browser only with your consent. You also have the option to opt-out of these cookies. But opting out of some of these cookies may affect your browsing experience.
Necessary Always Enabled

Any cookies that may not be particularly necessary for the website to function and is used specifically to collect user personal data via analytics, ads, other embedded contents are termed as non-necessary cookies. It is mandatory to procure user consent prior to running these cookies on your website.